Share All sharing options for: Contract Year Backfiring For Jones 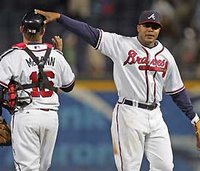 The way Andruw Jones is playing, Jones might feel obligated to prove to the Braves that he can put up numbers like he did in previous years, and accept a hometown discount. This season, Jones is batting .218 with 7 HR and 32 RBI. Last season however, he batted .262 with 41 HR and 129 RBI. His agent is Scott Boras and with Jones being just 30, they were hoping to command a 5-6 year deal, worth about 120 million dollars. The way he is playing, it would make sense for the Braves to let him walk and spend the money they have been saving up for someone like Torii Hunter or Ichiro Suzuki. Some are even considering Andruw Jones "the most overrated center fielder of all time." Although I disagree with that, he has struck out 54 times, and is on pace to strikeout 192 times, just three shy of Adam Dunn's single season record. Maybe teams are just pitching around him knowing how aggressive he is, and adjustments need to made on his part. Jones is batting .189 with 0 HR, 4 RBI, and 13 K is his last 10 games. The Braves are 4.5 games behind the Mets and need Jones to turn it around to lead them back to the top of that division.