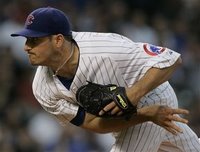 When the Cubs signed Jason Marquis for 22 million dollars, fans were outraged. Signing a pitcher who was left off the playoff roster for that much money is a waste. Not only that, he had 16 losses and an ERA over six! But so far, Marquis has proved everyone wrong, and has earned every penny of his 2007 salary. Tonight versus the Pirates. Jason Marquis pitched a complete game shutout, giving up three hits and striking out five. Alfonso Soriano helped the Cubs get the win, hitting a homerun in the first inning. The Cubs needed Jason Marquis to come out and go the distance after using up all the pitchers last night in a fifteen inning loss. Another good sign coming from the game, Matt Murton collected two hits, and Michael Barrett pushed up his average to .255. Jason Marquis improved to 5-1, dropping his ERA to 1.70. Carlos Zambrano takes the hill for the Cubs tomorrow, still trying to prove that he is the ace of this rotation. He will be faced off against former first round draft pick Paul Maholm.