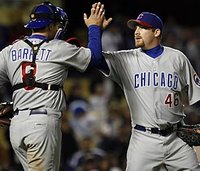 According to reports, the Yankees are interested in acquiring a starter, and may look to Ryan Dempster and the Cubs. Jim Hendry was unavailable for comment, but said he hopes to remain with the Cubs. Dempster is 9-for-10 in save opportunities, tied for sixth in save percentage among NL relievers. So why would they consider moving him to the rotation now? Dempster has only started six games since 2004, but has only had two winning records when he was a full time starter, and that was back in 1999 and 2000. I don't know exactly who the Cubs could get from the Yankees, but by trading him, they have no proven closer. Bob Howry and Scott Eyre aren't pitching like last year, and Carlos Marmol and Angel Guzman have too much potential to try and pitch them everyday, it would simply ruin their arms. Maybe the Cubs could swing a deal with Matt Murton, who they have also considered trading. Trading Matt Murton and cash or a PTBNL would probably get them Scott Linebrink, but at this point in the season it is uncertain. Before the Cubs do anything, I think the Cubs should try out Lou Piniella's idea of having the closer start the game and pitch two to three innings, and then bring in the normal starter to finish out the game. It would toy with hitters who would face the closer once, and then get a new pitcher with a fresh arm.