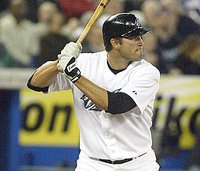 In recent weeks, Dodgers scouts have been seen at Red Sox and Blue Jays games scouting infielders to potentially take over the hole at third base. Since Mike Lowell and the Red Sox are doing very well, it is unlikely Theo Epstein would break up the team. Expect the Blue Jays, who are almost conceding the 2007 season due to a terrible 15-22 start, to hold a fire sale if they fail to turn it around by June or July.The Dodgers would probably call first and offer a boatload of prospects to acquire Glaus, who is batting .313 with 6 HR and and 14 RBI. The Dodgers currently have Andy LaRoche at third base, but what they need is a power hitting veteran who could put that team over the top and make them the favorites to win that division. Glaus signed a 4 year deal, worth 45 million dollars in 2005. So the Dodgers could ease LaRoche into a starting role in 2008, and if he isn't ready by the end of the season, there is a club option for 2009. The Dodgers are currently three games ahead of the Padres in the division.