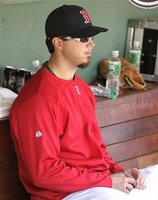 The Red Sox lost Josh Beckett in the forth inning to torn skin on his middle finger. The Orioles then added on 3 more runs to make it 5-0, and that carried into the bottom of the ninth. Julio Lugo led off the bottom of the ninth with a ground out. Then Coco Crisp reached on an error by catcher Ramon Hernandez. David Ortiz then drove in Coco Crisp on a double to make it 5-1. Wily Mo Pena and J.D. Drew then got on base to load them for Kevin Youkilis. Chris Ray walked in Ortiz to make it 5-2 for the captain Jason Varitek. Drew and Pena scored and the bases remained loaded, now it is 5-4. After a controversial call at home, the game remained 5-4 with two outs. A easy ground ball in between the first and second baseman, fielded by Kevin Millar. He then lobbed it behind the running pitcher Chris Ray who drops it, and two runs score. The Red Sox won 6-5 and improved their record to 25-11. Although Josh Beckett failed to get his eighth win, the bullpen proved better than ever, and hitting eventually came through. The Orioles drop to 18-20, but hope to regroup in Toronto for a three game series.

Victory For the Ages: Nationals pitcher Jason Simontacchi picked up his first victory of the season by pitching 5 1/3 innings and giving up three earned runs. It was his first victory since Sept. 20, 2003, against the Astros. It has been 1,332 days since his last win.