Share All sharing options for: Giants Morris Coming Around 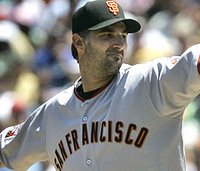 After struggling in his first year with the Giants, going 10-15 with a 4.98 ERA, he has turned his Giants career around and has turned into the ace of the rotation. So far this season, he is 5-1 with a 2.93 ERA and 29 K. In his last start versus Oakland, Morris pitched a two hit complete game, striking out nine. With newly acquired pitcher Barry Zito struggling, it is nice to turn to a veteran pitcher who has the only winning record in the rotation, besides new addition Tim Lincecum (1-0). Morris has pitched with the Cardinals and Giants, and has only had one losing record, which was last year. He is 116-78 career wise, with a 3.76 ERA and 1132 K in his ten year career. If he is available in your fantasy league, he is definitely someone that should be picked up, because not only will he guy you wins, but will strike out a lot of guys, and rack up innings.