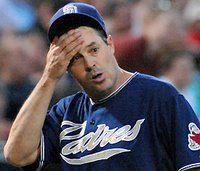 Greg Maddux almost pitched a complete game shutout, but gave up one run in the top of the ninth to lose it. However, he still pitched an unbelievable game, giving up five hits and striking out five in a 7-1 victory over the Reds. Josh Bard and Mike Cameron combined for four RBIs in tonight's victory, while Kouzmanoff, Greene, and Cruz Jr. contributed as well. Maddux is now 3-2 with a 3.20 ERA with 31 K. He now has 336 career wins. The Padres improved to 21-18 and are now just 2.5 games behind the Dodgers.