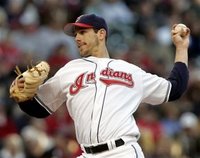 I'd like to welcome the newest website to the MLB Rumors Insiders, The Tribe Source, where they talk about the Cleveland Indians. Over at Tribe Source, they talk about Cliff Lee's excellent performance and how several Indians players are finding their swing, which will benefit them as they try to hold on to first place. "Paul Byrd will try and continue our winning ways (2-1, 2.92). He will take on the Angels young phenom Jared Weaver (1-3, 5.12), do not let those numbers scare ya, he was unhittable against us last year so we need to attack him." (Tribe Source). The Indians come into this game with pretty good odds. They are sending Paul Byrd to the mound, who is 3-0 with a 4.15 ERA lifetime against the Angels in five starts.The Indians have also won 13 of their last 16 and gained a lot of momentum on this three-game series behind the three-hit pitching of left-hander Cliff Lee yesterday. Furthermore, the Angels have lost five or their last six and are hitting .202 in their last six games.