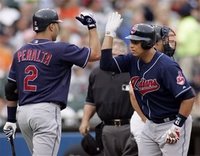 Check out Tribe Source for the latest on the Cleveland Indians in arguably the most competitive division in baseball. They mention CC Sabathia's impressive outing and who helped secure that victory to give them a game and a half lead in the division: "Came up big here today for Ducc. He went 2-4 today, including a tie breaking 2 run homer, his 2nd of the season to give the Indians a 5-3 lead in the 8th inning. He also had a triple..." (Tribe Source). Also coming through in a big way was Victor Martinez, Grady Sizemore, who had his first triple of the year, and Jhonny Peralta. A good bullpen is hard to come by these days and the Indians proved they had one yesterday with Tom Mastny and Joe Borowski holding the game. Borowski was able to pick up his sixteenth save. Give some credit to Tribe Source, showing little bias, acknowledging the impressive outing from Justin Verlander, and even go on to mention Marcus Thames' broken bat homerun. After all of yesterdays game breakdown they give a pregame summary of what to look for in the next couple of days, check it out.