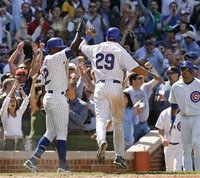 The Cubs were coming off a 2-5 road trip entering this interleague series against the White Sox, and played today like manager Lou Piniella thought they would all season. Ted Lilly pitched a good game, but didn't have the same dominating stuff he had in his previous start. Mark Buehrle also pitched a pretty good game, but his numbers don't look that way. He was tagged for two runs after he was pulled in the seventh. Jermaine Dye helped the White Sox early with a homerun, along with a sacrifice fly from Juan Uribe. Michael Barrett tied the game in the bottom of the second with a homerun, then Angel Pagan, fresh off a callup from the minors, was 3-5 with 2 RBI. The Cubs were able to take advantage of C Toby Hall's first game back from an injury, despite his two hits on the game, one a double. The Cubs bullpen was finally able to hold a lead, two shutout innings from Bob Howry and Ryan Dempster, who got the save. The Cubs improved to 19-21 and will send Jason Marquis (5-1, 2.22 ERA) against the White Sox (20-18) and Javier Vazquez, who is 2-2 with a 3.86 ERA.