Oliver Perez pitched an incredible game for the Mets in game one, going 7 2/3 innings, giving up two earned runs, and striking out five. With help from Endy Chavez, who hit a two run homerun, they were able to power past the Yankees and collect their third straight win. Andy Pettitte also pitched a great great, going seven innings and giving up three earned runs. On the Yankees side, Hideki Matsui hit a two run homerun, but that wasn't enough to beat the Mets. Tomorrow's game is the hands of the Mets, sending Tom Glavine to the mound against the impressive rookie Darrell Rasner. The Mets pushed two games ahead of the Braves, and will look to make it three tomorrow at 3:55 p.m. ET. Although Rasner is going up against a future Hall of Famer on National Television [FOX], he seems ready now: "I'm excited for it," Rasner said. "It's an opportunity to go out and try to help this team win a game, and pitch in a big-league ballgame. I'm going to look at it like it's any normal game. I don't think I'm going to get any more worked up about it. You can't really get caught up in that. You've just got to keep a level head." If you were to look at it by schedules, 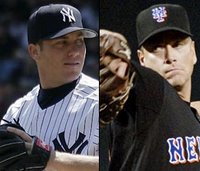 the streaking Mets have this game in their hands. The Mets have won 8 of 10, and have had a few come from behind victories that have ignited the whole team. The bullpen is doing better than expected, and Oliver Perez has really turned his career around, after a terrible 3-13 record last season. One problem with the Yankees is they are sending two rookies to the mound this series, and when you have players worrying about what kind of team player Roger Clemens is, the chemistry in the clubhouse can't be good. Furthermore, when players are bouncing back in forth from the minors and the clubhouse is constantly changing, there is no time for the team to truly bond. Right now the Yankees need to scrape up a couple wins, keep the same team for a couple weeks, and let this team roll. Then they will be able to slice that ten game deficit in half and contend for the AL East.