Share All sharing options for: Interview with Harold Reynolds 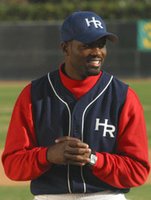 Harold Reynolds was nice enough to sit down and do an interview with me via phone for MLB Rumors. Harold Reynolds is a two time All Star and collected three gold gloves during his excellent twelve year career. He just finished a baseball instructional video with past and current players, including Hall of Famer Tony Gwynn. All that information is available at www.hrbaseball.com. I would like to thank Michael Dillion from Reynolds Sports Management for his help in setting this interview up. I also want to thank Harold Reynolds again for donating his time to me and the site.

ELI: When did it first think you that you might play in the major leagues?

HAROLD: When I was fourteen years old, I had a scout by the name of Larry Diamoato hand me his card after one of my Little League games. He was a scout with the Cincinnati Reds. He said to me, "Son you have a chance to play major league baseball." And that planted a seed in me that I had the potential to play baseball at the professional level. I also have two older brothers that played so I knew then I had a good chance.

ELI: You were first drafted in 1979, but you did not sign, what were your reasons for not signing?

HAROLD: I didn’t think I was ready. I was only about 5’8’’, 150 pounds, and I didn’t think the grind of a long season was something I could endure. I went to San Diego St. and grew up a lot. After a short time, I transferred to a Cañada Junior College in northern California. I filled out some, improved my game, and really love the environment that I was playing in. I think that helped my game a lot because I was taken number two the following year in the draft.

ELI: What was it like being drafted number two?

HAROLD: It was great, a great honor. I had a lot of experience which helped me go higher. I played with the Alaska Goldpanners, which has a lot of history with good ballplayers, so that looked good to a lot of scouts. Players like Tom Seaver and Bob Boone played up there before me. It was nice playing up there, a honor because so many great ballplayers played there.

ELI: Did you have a favorite stadium to play at during your career?

HAROLD: Probably Seattle. On the road though, probably Kansas City. I got my first major league hit there, it is a special place. I hit a double off the top of the wall off of Larry Gura, who strung a good couple of 18 win seasons together.

ELI: What was it like being traded from the Padres to the Angels? How were you told and what did you think?

HAROLD: It was interesting. I didn’t mind being traded, going back to the AL. I was grateful GM Randy Smith gave me the opportunity to go back and have a starting job.

ELI: What was it like walking into the new clubhouse for the first time?

HAROLD: I knew most of the guys so it wasn’t bad. I mean I played in the AL for so long I saw them all the time. But one moment that sticks out in my mind is when I first met Rex Hudler, who just came over to the Angels. He was one of the most enthusiastic guys you will ever meet. He could make any bad day good again. So anyways he comes up to me and says, "Dude, can you believe Rod Carew is my hitting coach!" I didn’t know if he was joking or if he was serious. It turns out he really was serious and it just shows how enthusiastic he really was.

ELI: Growing up in Oregon where there is no professional baseball, did you have a favorite team?

HAROLD: I was Giants fan growing up.

ELI: Did you have a favorite ballplayer growing up?

HAROLD: Family favorites included Willy Mays and Roberto Clemente, but as I grew up my favorite player became Rod Carew.

ELI: You’ve called some pretty big games in your broadcast career, is it stressful calling games?

HAROLD: No, It is fun. I love teaching baseball and pointing out things that people do not see during the game.

ELI: What is it like in the broadcast booth during the game? How many people are in the booth usually, and what are they doing?

ELI: I heard you have some sort of DVD Set, can you tell me about that?

HAROLD: Yeah, you can find all the information at Hrbaseball.com It is an Instructional Series teaching all the aspects of the game with great ball players. It is the best series ever created, period. It is shot in High Definition with Ozzie Smith teaching infield, Hall of Famer Tony Gwynn on hitting, former Marlins manager Joe Girardi on catching, former Rangers manager Buck Showalter on coaching, All-Star Twins outfielder Torii Hunter on manning the outfield, Jeff Brantley on pitching, and myself on the base paths. Like I said, the best series ever created. Everyone in this video was an all-star at some point in their career.

ELI: What was it like playing in the All Star Game?

HAROLD: The All Star Game is great, but it is a quick three days and you really do not get to know everyone. It was a great honor to play in the game. One of my best memories of playing was in my first All Star Game; Willy Randolph was the leading vote getter and was starting at second base. But he had a sore hamstring. So he came up to me and said "Kid, I’m taking one at-bat, and that game is yours." I love it, standing next to players that I watched growing up: David Winfield, Dooie [Dwight] Evans, it was a trip.

ELI: What is the dugout like during the game? Is everyone focused?

HAROLD: You know, it is not like high school where you play once a week. You see the same guys every day so I would say it is competitive, but-you know this is what I say about it: Baseball is an individual game and a team concept. No one is standing at the plate but you.

ELI: Do you hope to get back into baseball in future? Maybe in a Front Office role?


HAROLD: I’d like to get back into TV. I’d liked doing what I was doing and want to do it again. I like helping people understand the game better.