Share All sharing options for: Interview with Michael Barrett 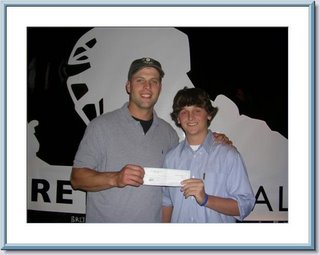 Yesterday evening at Gino's East Pizza Restaurant in Chicago, Michael Barrett was kind enough to sit down and answer all of my questions for MLB Rumors during his fund raiser for The Michael Barrett Foundation. Proceeds benefited Leber's Congenital Amaurosis, the same disease that Derrek Lee's family is raising money for through Project 3000. So after I presented him the check that MLB Rumors raised through the month of April, Barrett, although tired after an extra inning victory against the Washington Nationals, answered all my questions honestly, and thoroughly. Michael Barrett is currently the Cubs catcher and is in his fourth season with the Cubs and is in the last year of his contract. I know all Cubs fans are hoping that GM Jim Hendry signs him soon. I would also like to thank Matt Kramer, Linda Marshall, and Alan Leiberman for all their help these past couple weeks getting this interview set up, it really means a lot to me, and the readers of MLB Rumors.


ELI: When did you first realize that you might play in the Major Leagues?

MICHAEL: I always dreamed of playing in the big leagues and I think that my senior year, or actually my junior year [of high school] a guy by the name of George Lombard got drafted in the second round. He went to a rival high school, and I guess at that point I realized that there was going to be a shot and a chance for me to get drafted just like he did and I realized that as high as he went in the draft that I was going to get ample opportunities once drafted to make it to the Major Leagues and I decided at that point that it was in reach.

ELI: What do you think of the new coaching staff this year?

MICHAEL: So far, it's an interesting staff, interesting staff. Lou Piniella is great, very intense individual, very passionate. I've never really been around anyone like him. Dusty [Baker] is a good friend of mine and they have a lot in common, more similarities than most people would think. But Lou brings a different attitude, a different intensity, not afraid to get on guys, he's not afraid to chew 'em out, go out to the mound and rattle their cages a little bit. And then we got Alan Trammell, and he's like the most positive guy in the world, never been around or nicer human being than him, especially in baseball. And we got a great hitting coach in Gerald Perry. And I really enjoy Matt Sinatro, the catching coach, who's been a tremendous influence on me, already, in my defense. We got a few other great coaches in addition: Ivan Dejesus, who was a gamer when he played, great defensive guy. Mike Quade, who's awesome- [interrupted]

ELI: He got knocked down.

MICHAEL: Yeah he got knocked down trying to do...I don't know what he was doing [laughs]. Just got knocked down. But are entire staff is great, we got a lot of great guys. Larry Rothschild the pitching coach is back, and I am working with him to prove to people that he is legitimate as they get and that things in the past are not because of him.

ELI: Who do you think is the biggest joker in the dugout during the game?

MICHAEL: Well when Ryan Dempster decides to grace us with his presence in the dugout he is by far, but he is generally in the clubhouse watching the game getting ready to close the game. But other than him, we don't really have any pranksters.

ELI: Who is the best roomate you have had on the road?

MICHAEL: Well, I don't have roommates in the big leagues anymore. But in the minor leagues, I had some good roommates man, some good stories, but I'd say Peter Bergeron is the best roommate I have ever had.

ELI: For a 1:20 game, what time do you usually arrive at the stadium and what do you do to get ready?

ELI: Can you think of a funny moment you've had with a pitcher during a mound visit?

MICHAEL: Yeah, just recently Ted Lilly was pitching in the first inning against the Pittsburgh Pirates, and he slipped twice on two bunt plays. [pause] Anyways, Lou came out to check on him and asked him if he had his metal spikes on and he did. Lou then said well do you have any other cleats in the locker room and Ted said, "Skip, your zippers down." Lou was really embarrassed about that. He turns to do something about it, but then realized that he was on national TV and realized he couldn't do anything. That was a very awkward, but funny story.

ELI: What was it like being traded from Montreal to Oakland, and then immediately to Chicago?

ELI: When the season ends in October, how much time do you take off before getting back to work?

MICHAEL: Normally, two weeks. And two weeks to basically heal, let my body heal. Let all the nicks and wounds that I get during the season heal and then after that, my offseason is my on season.

ELI: If you weren't a catcher, what position would you want to play?

MICHAEL: I love shortstop. If I had the athletic ability to play shortstop today, I would do everything I could do to play it. It is a great position, I love it. I love the infield and it's a special place to play, only the best athletes on the teams play there.

ELI: On the road, which team has the best away clubhouse?

MICHAEL: Good question. Um, a lot of the newer stadiums have all great clubhouses. Probably [pause], trying to think of my favorite. God, there all good [laughs]. Man, I love them all. You'll have to give me a second, I'll tell you.