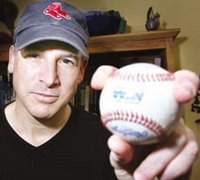 With the Israel Baseball League just a month away from its inaugural season, I felt I should interview the first members of the league. Pitcher Ari Alexenberg was kind of enough to answer my questions through email after I contacted him through his blog site: Ari Alexenberg. He has been pitching since his early twenties and was just drafted this week into the IBL. I would like to thank him again for donating his time to answering some of my questions.


ELI: Has it been a dream of yours to play in the IBL?

ARI: It is a dream come true in the sense that it is a thrill for me to have the opportunity to play the sport I love in a country that I love. But I never really dreamt of the possibility before the IBL. Since there was no pro ball in Israel I never entertained the notion.

ELI: How long have you played baseball ?

ARI: Growing up as an observant Jew in the 1970's there was no opportunity to play organized baseball. I played a lot of stickball and thought about playing organized ball someday. At the age of 23 I finally got my chance and have been playing ever since.

ELI: Is there fear, or are you worried, that a stadium might be a target of an attack?

ARI: The threat of an attack is an old problem that Israeli's learn to deal with by having strong security in place. The same security measures Israel puts in place for soccer and basketball games should work for baseball games.

ELI: I'm embarrassed to say I couldn't find what team you are on, do you have an idea where you are going?

ARI: The team rosters were announced today. I will be pitching for the Petah Tikva Pioneers.

ELI: Who was your hero growing up? Who do you thank for your success in baseball?

ARI: Growing up I was a Met fan and my baseball heroes were Rusty Staub and Tom Seaver. Being that I did not have any coaching growing up I had to teach myself everything I know about baseball. So there is really no person for me to thank for my baseball success. Though my wife encouraged me to tryout for the IBL, otherwise I would not have done it.

ELI: What number do you plan to wear this season?

ELI: This is a great idea, do you expect it to be widely popular?

ARI: I believe it will require years of continued effort for the game to be widely popular in Israel. But there is a large American population in Israel that is a built in base from which to get started.

ELI: After hearing about the league, It became an immediate goal of mine to potentially spend a summer or two playing baseball in Israel, what advice would you give to me, and other kids that aspire to do the same?

ARI: Work hard and smart to become the best player your abilities will allow. Get as much game experience as you can and when you feel you are ready simply attend a tryout.

ELI: I can tell you are a Red Sox fan, do you still follow them?

ELI: Do you hope to face Sandy Koufax if you play the Miracle?

ARI: I would love too!!! Though I don’t like facing lefties.