Share All sharing options for: Interview with Shawn Hill 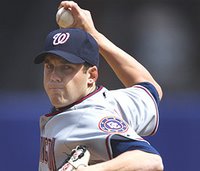 Two weeks ago, I came into contact with West Coast Sports Management who set me up with Nationals pitcher Shawn Hill, who unfortunately is sidelined on the DL. After sending my questions over to him, he responded to them better than I could have hoped for. I want to thank him and everyone at West Coast Sports Management for helping me get this interview done. Before Hill was placed on the DL, he started off strong, going 3-3 with a 2.70 ERA and 33 K. Despite some injuries, I am confident that he will be a bright spot in the Nationals starting rotation for the next several years to come. I want to again thank Shaun Hill for donating his time to MLB Rumors.

ELI: Did you play any other sports growing up in Canada? Is baseball your favorite?

SHAWN: I played volleyball and basketball in school, and one year of soccer one year when I was very young. But I started playing baseball when I was 4 and it was always my favorite sport.

ELI: Were you disappointed to leave Canada and move to Washington in 2005?

SHAWN: Definitely, only because I have family that still resides in Montreal. On the other hand it was understandable given the attendance issues and financial situation of previous ownerships. Once we have this new stadium done here in DC though it should definitely be a lot of fun to play here everyday.

ELI: Did you think you could make a successful comeback after Tommy John Surgery?

SHAWN: Yeah, I've still got a long ways to go before I can say it's successful but I feel good about where I'm at now, and for the most part how it feels day in and day out.

ELI: What did playing in the Futures Game in 2003 mean to you?

SHAWN: It was a fun experience, although I never got to pitch in the game itself. More importantly it was nice to represent my country, as well as finally get a little confidence in myself realizing I had made somewhat of an impression in the minors to get that honor.

ELI: What was it like playing on Team Canada in 2004? Any one on that team playing in the major leagues now?

SHAWN: It was easily the best group of guys I've ever played with as a whole. The whole experience over there was incredible; although very disappointing. But I took a lot from it in the end so I'm very thankful for the chance to play on that team. I know Pete Laforest is with San Diego right now, and Pete Orr is with Atlanta. There's a couple other guys in the high levels of the minor leagues still, and we also had Justin Morneau, Russ Martin and Scott Thorman with us on the team that qualified for the Olympics in 2003.

SHAWN: He's been great, very upbeat and encouraging all the time. I think it's been a great fit with him here considering the team we have and the situation we all know we're in with rebuilding. I really think he has the right mindset right now in regards to dealing with us as a whole and individually right now.

ELI: Do you follow baseball during the off season?

SHAWN: I'll watch the playoffs of course, aside from that though I just check on stuff once in awhile, otherwise I hear most of stuff that goes on from friends and family or on TV while I'm watching another sport perhaps.

ELI: You've pitched in a lot of places in your career, which stadium has the best mound? Food? Clubhouse overall?

SHAWN: Tough call, but I'd have to say Philly personally. It's a great field and facilities are top notch. Milwaukee and San Diego are pretty nice as well though.

ELI: During a rain delay, what is usually on the TV in the clubhouse?

SHAUN: Usually another baseball game that's playing at that time, or times like right now a NBA playoff game might very well be on.

ELI: Have you ever asked another player on a different team for his autograph?

SHAWN: Nope, a lot of guys do trade autographs, and its common practice, but I just feel like I need to get a little more established before I start bothering guys for their time.

ELI: When the season ends, as a pitcher, how much time do you take off before getting back to work?

SHAWN: Usually about 3-4 weeks of downtime, somewhat active though, and then I start lifting right away followed by a throwing around the middle of December.

ELI: Do you stay in touch with most of your teammates during the off-season?

SHAWN: Some of them. It's been a little tough for me the past couple years because I've bounced around here a bit with being on the DL and having surgery and such. Hopefully now that I'm spending a good amount of time up here and able to get a little tighter with the guys, I'll keep in touch more so.