Share All sharing options for: Interview with Tony Pena 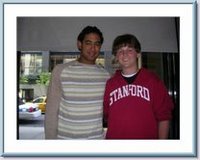 This morning, Royals shortstop Tony Pena Jr., son of catcher and Yankees coach Tony Pena, met with me at the Westin Hotel in Chicago, before he went to U.S. Cellular field to prepare for the second game of the series against the White Sox. As I sat and waited for Mr. Pena to come down, I saw many stars like Scott Elarton, Mark Teahan, David Riske, and Jason Standridge. As I restrained myself from chasing autographs, Tony Pena called me up and we finally met in the lobby. Pena has gotten off to slow start in his first year with the Royals, but he is showing as a rookie that he can hold the position and ease into hitting in a new league. There is no doubt in my mind that he will be a very good ballplayer someday. I would also like to thank Jim Kuzmich, who is the Vice President and heads up marketing at GAAMES, a sports representation firm for getting this interview set up.

ELI: What was it like being traded by the Braves? Did you expect it to happen?

ELI: Have you noticed any big changes playing in the different leagues?

TONY: Baseball is the same everywhere, you know. I’ve just been adjusting to the leagues. You know the American League and the National League aren’t the same, so I am trying to adjust to that.

ELI: When did you first realize that you might make it to the major leagues?

TONY: When I was going up the scale, like Double-A. From Double-A up is when you pretty much start to have an idea on what’s going to happen to you and that is when I started to get a feel for it.

ELI: How long have you played baseball?

TONY: Professionally this is my eighth year.

ELI: Have you always been a shortstop?

ELI: Are there any players on the club that serve as mentors for you?

TONY: Yeah lots of guys. Reggie [Sanders] and Mark Grudzielanek are always trying to keep me on track. Esteban German is always telling me things about the game. Me being a rookie most of the guys try to help us [other rookies] out.

ELI: Your dad is a coach with the Yankees, what role has he played in molding you into the ballplayer you are now?

ELI: Do you have a lineup preference?

TONY: No, not really. Just go out and wherever they put me, I’ll play.

ELI: This is a very young team with a few veterans, what is the chemistry like in the clubhouse?

TONY: You know were hoping for the experience to get us going. We got a lot of young guys and it is just fun being around all of them.

ELI: Do you have a favorite clubhouse on the road?

ELI: Do you have any friends around the league that you hang out with during the off season?

TONY: I hang out in the off season with Andy Marte, Brayan Pena whenever we play Winter Ball. And some of the other guys that I play with back home in the Dominican.

ELI: What do you like to do with your free time?

TONY: Lay down. Just watch TV and relax. Relax as much as I can.

ELI: Do you have a pregame ritual? Any superstitions?

TONY: Sit down at my locker and try and get concentrated for the game. You know, get my game face.

ELI: You’ve got a brother with Mets, do you try to keep in touch with him?

TONY: Yeah, I talk to him just about everyday. See how he is doing. He’ll call me or I’ll call him just to see what is going on.

ELI: Do you plan to sport the pink bat for Mother’s Day?

TONY: Of course. Any time you get a chance to appreciate Mother’s Day and especially when it is a good cause.