Share All sharing options for: Josh Towers to St. Louis? 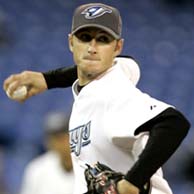 Blue Jays GM J.P. Ricciardi has called around letting teams know that Josh Towers and Tomo Ohka are now available. The Jays seem more than willing to pick up his salary, so it seems that packaging a minor leaguer or two would do the trick. The Cardinals are struggling to find pitching and could take a chance on Towers, hoping a change to the NL would do him well. Could they offer Rick Ankiel? Probably not, Ankiel is batting .281 with 9 HR and 31 RBI, but a package of two Double-A arms would probably suit the Blue Jays. One thing is for certain, if the Cardinals want any chance to contend in the NL Central they will need to find proven pitching. Towers has proved he can pitch, but hasn't had a solid offensive team behind. I think the Cardinals should take a chance on him, especially if it will only cost them a minor leaguer or two. Many struggling pitchers have shown they can make the jump from the AL to NL, and I think Towers would be one of those pitchers. He can eat up innings and a team like the Cardinals, who put up good numbers, would definitely be behind him. Ohka won't draw the same interest because he has been having arm troubles, but teams like the Nationals, Pirates, and maybe even the Mets might be interested.