Share All sharing options for: Marlins Keep On Rolling 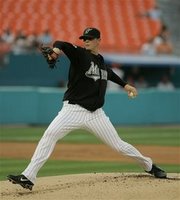 After Jason Werth collected all three RBIs early, the Phillies moved into the sixth with a comfortable 3-1 lead. However, a leadoff double followed by a triple with an error, scored two. Two outs later with two runners on, Jason Woods doubled to the corner to score both runs to make 5-3. Cole Hamels couldn't get out of the inning after striking out back to back Marlins and after walking Boone, he couldn't get ahead of Woods. It was obvious Hamels didn't have the same stuff this outing. He was dropping his arm on his release, and his release point was inconsistent towards the fifth and sixth inning. I think that is something that can easily be fixed, so expect a good performance in his next start. After Scott Olsen was pulled after six innings, the Marlins pen was able to hold the Phillies to just one hit, and strike out four. The Marlins are on a four game winning streak and will look to make it five when new pitcher Byung-Hyun Kim will take on struggling ace Freddy Garcia.