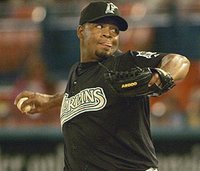 The Florida Marlins traded struggling reliever to Colorado for struggling pitcher Byung-Hyun Kim. The Marlins were looking for a closer in spring training, and thought they had found one when they traded Yusmeiro Petit to the Diamondbacks for Jorge Julio and cash. However, Julio struggled with the Marlins and acquired no saves, had an ERA over 12, and only six K's in ten games. Kim also struggled with the Rockies, going 1-2 with 10.50 ERA and 2 K. Kim will probably be used in the bullpen, while Julio will joining there pen. Julio has 99 career SV's, with a 4.41 ERA. Kim was on the 2001 Diamondbacks World Series Team, but has never really lived up to standards in his big league career. He is 45-54 with a 4.20 ERA and 701 K. He has never pitched in the NL East so he may have the advantage early on.