Share All sharing options for: Meche Proving He's Worth 55 Million 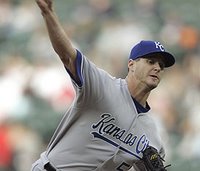 New Royals ace Gil Meche has been everything the Royals have hoped he would be, improving his record to 3-1 with a 2.23 ERA and 35 K. Today, Gil Meche allowed two hits in seven innings, retiring 17 straight batters after a two-run homer in the first. With four hits from Ross Gload, the Royals defeated the Angels 5-2. Brandon Duckworth and Joakim Soria helped complete the three hitter, and pushed Jered Weaver's record to 1-3. The Royals split the four game series, and now welcome Justin Verlander and the Tigers for a three game series. Although the Royals are 8.5 games out of first place, they are on a two game winning streak, and hope that Gordon and Pena can turn around their rough starts and help the Royals become a more competitive team in the division.