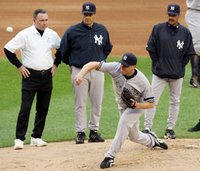 After just nine pitches, a come-backer from Endy Chavez hit Darrell Rasner in the hand and broke his right index finger, making him the sixth pitcher on the DL. Mike Mussina and Chien-Ming Wang have already recovered from injuries, and now they are pushing Clemens to get back as soon as possible. Rasner will be out two to three months, forcing the Yankees to look to their minor league system once again. Tyler Clippard will start tonight against the Mets, and it will be his Major League Debut. Clemens pitched four innings for Tampa on Friday, giving up one earned run. The Yankees will probably rush Clemens to make one more start, and have him return to make his season debut in Boston on June 2nd or 3rd. Kei Igawa pitched Saturday for Tampa, going four innings, giving up three hits, 2 runs but none were earned, and striking out two. He did get the loss but it is some 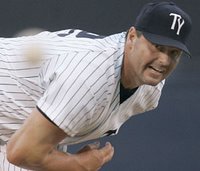 improvement from his disappointing start in New York. The Yankees won't rush him as much, but Igawa will probably be pressured to be successful if they Yankees want to contend this season. After Jason Giambi told USA Today that he once used steroids could lead the Yankees to voiding his seven year deal, worth 120 million dollars he signed back in 2001. According to sources who wish to remain anonymous, the Yankees will look into terminating Giambi's deal if it is determined that he used illegal drugs after they signed him in 2001.