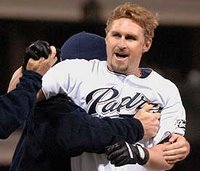 Phil Nevin, the top pick in the 1992 MLB Draft, announced his retirement today after an excellent twelve year career. Although it is not Hall of Fame worthy, he was an All-Star and voted Padres MVP three times. Nevin had a quick temper, and that may be the reason he jumped around so much in his career. His best year came in 2001 when he batted .306 average, 41 homers and 126 RBIs. Although teams showed interest in him this past off season, he said the right offer didn't come. Nevin hit .270 with 208 homers and 743 RBIs in his career. He has played with the Rangers, Cubs, Twins, Padres, Angels, Tigers, and Astros.