The Next Wave of Stars Are Here

Share All sharing options for: The Next Wave of Stars Are Here 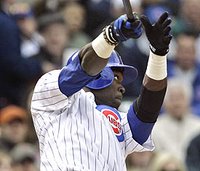 The first month and a couple days have given fans a chance to see the teams most treasured prospects in hopes that they will turn into something great. Elijah Dukes of the Devil Rays is getting the opportunity to play everyday, Felix Pie of the Cubs might get his chance to start this year but fans were given a quick glimpse of what he is capable of, Hunter Pence of the Astros is making a case to be a starter in center, Jarrod Saltalamacchia of the Braves got called up when Brayan Pena went down, the Giants will see Tim Lincecum start today and hope he performs like he has his whole

career, and now the Dodgers call up Andy LaRoche after Marlon Anderson hurt his elbow; these are the names fans hope to hear for years to come. The Yankees have had ten starters in the first month of the season, and have put their top prospect Phil Hughes on the DL after two starts. Always with new prospects comes the end of an era: Tom Glavine, John Smoltz, Greg Maddux, David Wells, and Randy Johnson are just a few pitchers that are in their last years. Luis Gonzalez, Craig Biggio, Julio Franco, and Barry Bonds are names that are quickly being compared to new, younger players. So in the next months to come, we will see records broken, many first hits or homeruns, and busts or all stars as the 2007 season unfolds.