Share All sharing options for: Phillies Place Howard on DL 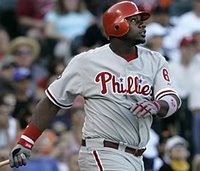 The Phillies decided they had no choice and placed the injured Ryan Howard on the DL with strained quadriceps. Howard will be able to return May 25th, when the team expects him to have fully recovered from his injury. "We feel that every time he has to perform, he aggravates it," assistant general manager Ruben Amaro Jr. said. "We fully expect him to be 100 percent by the time he's expected to be activated." So far this season, Howard is batting .204 with 6 HR and 23 RBI. The Phillies called up Chris Coste in his replace.