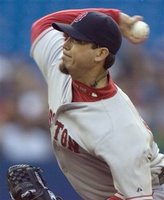 The Red Sox defeated the Blue Jays in the opener tonight to improve to 21-10. Josh Beckett took the mound and improved his 6-0 record collecting his seventh win. Beckett went seven strong innings, striking out five. His teammates helped him collect the win by belting four homeruns. Youkilis, Pedroia, Lowell, and Varitek contributed 8 of the nine RBIs to hand the Blue Jays their seventh straight loss. Run support has been abudant in Beckett's starts. In his seven starts, the Red Sox have scored 50 runs while he's been in the game. Terry Francona was very impressed with his start, but was not surprised: "We've been saying all along he's matured," Red Sox manager Terry Francona said. "He's a better pitcher. He feels good about himself." Terry Francona collected his 300th win as Red Sox manager and will send rookie Daisuke Matsuzaka to the mound tomorrow against Tomo Ohka in the second game of the series against the Blue Jays.