Share All sharing options for: Roger Clemens Signs With Yankees 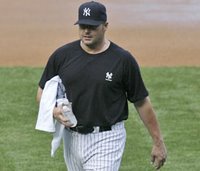 Sorry it is so late but I was at the Cubs game and then had to come home and leave immediately to go to my interview with Michael Barrett. Anyways, the Yankees, desperate for pitching help signed Roger Clemens to a Minor League contract for the 2007 season. Clemens will earn $28 million on a prorated basis from the first day he is added to the Yankees' Major League roster. "I'm coming back to do the only thing they know how to do with the Yankees, and that's win a championship," Clemens said. "Anything else is a failure, and I know that." Clemens contract negotiations have been something of a roller coaster for the past month or so, with the Red Sox and Astros getting in the way of the Yankees desire for a quality pitcher. Clemens and the Yankees announced that he was returning to the Yankees at today's game against the Mariners and the Yankees plan to have Clemens to make three rehab starts in the Yankees farm system and then be ready to pitch in the Yankees rotation by the end of May, at the earliest. Clemens has a 348-178 career record, with a 3.10 ERA and 4604 K over 22 seasons with the Blue Jays, Red Sox, Yankees, and Astros.