Share All sharing options for: Scary Moment for Reds, Freel 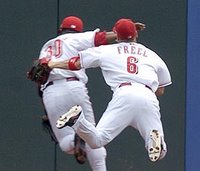 At the start of the third inning, catcher Humberto Cota hit a drive into right center field. Ryan Freel and Norris Hopper both gave chase, and following the impressive catch from Freel, him and Hopper collided sending both players to the wall. Freel's head hit the ground first before he came to a stop at the base of the wall. According to Hopper, Freel was unresponsive when he ran over to see if he was okay. "You're worried and concerned," said catcher David Ross, who hit a two-run homer in the game. "We're all family. It's like a family member that's down out there. You're concerned. We know what kind of player he is, and he goes hard. Stuff like that can happen. To hear he's alright is good news." Freel was diagnosed with contusions to his head and neck but will be OK. He is expected to miss a couple days however, up to a week most likely. He is batting .251 with 2 HR, 12 RBI, and 8 SB in 49 games this season. Despite the scary moment, the Reds were able to shutout the Pirates 4-0 on Kyle Lohse's complete game six hitter.