Should the Cubs Trade Zambrano?

Share All sharing options for: Should the Cubs Trade Zambrano? 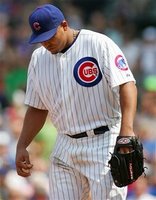 According to the Journal News, the Mets and Yankees are eyeing Carlos Zambrano, who's contract is up at the end of the season. Zambrano, who was nearing a 85 million dollar deal, has struggled this season. He is 3-3 with a 5.83 ERA and 35 K. Not the best stats for a number one starter who's collected 46 wins since 2004, excluding this season. When he started off slow in April, many speculated that he gets off to slow starts in April although his record is 9-5 with a 4.39 ERA. Nevertheless, now that April is over he should be getting back to the ace form that we all expected. But he got rocked in his last outing and now the Cubs are relying on three pitchers (again), to pitch successfully. In 2007, Zambrano has given up 43 hits, 22 walks and nine homers in 40.1 innings, for a 5.80 ERA. According to Buster Olney, many people in the Cubs circle that interact with Zambrano think that his contract is bothering him. How could it not? Every game he goes out to pitch in he feels is an audition. And if he does do poorly, he has four days to think about how it is effecting his contract. "He's been the good guy in this negotiation so far. He's shown a willingness to take a hometown discount (for extraordinary money, yes), he's waited for the Cubs to complete the deal, and he hasn't been screaming about the delays. He's kept his mouth shut." (Buster Olney). Now it's time to consider trading Zambrano. Letting him walk at free agency and hoping you get a solid draft pick won't be the same as trading him. Trading him you are guaranteed a top prospect, that is at least a year away, and at least a proven player. Trade him to the Mets in July for Mike Pelfrey and two other players. Or to the Twins for Matt Garza and a couple other players. Or try to snag Cole Hamels. Maybe a couple players from the Yankees. The over throwing now should catch up to him in the next couple years, and that won't equal seventeen million a year (even though that will be bargain in 2008). I think if the right offer comes in July, and assuming Cubs hitting picks up, they should look into trading him.