Teams Would Be Smart To Look At Ensberg

Share All sharing options for: Teams Would Be Smart To Look At Ensberg 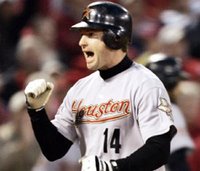 The Astros are looking to trade Jason Lane and Morgon Ensberg, and there is simply no market for them. They have looked around, and teams are not offering anything worth the Astros time. Ensberg has been struggling this year, batting .213 with 2 HR and 11 RBI. But last season got off to a great start, was on pace to hit about forty homeruns, but a couple injuries along the way limited his season. Right now, he has had a rough time in Houston, and I think a simple change of scenery would do him well. The Dodgers, who are looking for a third baseman, should look at him, and worse comes to worse, they platoon him with LaRoche to help him ease his way into a starting role. The Royals' Alex Gordon has been struggling at third base, and I think platooning him with someone like Morgon Ensberg, would do him a lot too. And if Ensberg can come through there, that would do wonders for the team and would make players like Mike Sweeney and Reggie Sanders expendable. Again, it is probably to early to trade and get anything good in return, the best thing they can do it wait for them to turn it around or for trading to heat up.