Villone On The Block?

Share All sharing options for: Villone On The Block? 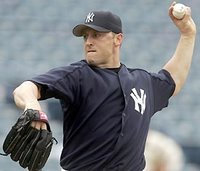 The Yankees have Sean Henn and Mike Myers in the bullpen, both good pitchers doing well. And with both of them doing well it makes Ron Villone expendable. Villone is doing very well in Triple-A. Going into last night's game against Columbus, he had a 1.90 earned run average with 27 strikeouts in 23 2/3 innings. The Phillies who are low on relief pitchers could use him, but assistant general manager Ruben Amaro would not comment on it. Here's why I bring this up, Villone has a clause in his contract that expires today stating that if Villone isn't in the big leagues by today, he can request free agency. The Yankees have till tomorrow to either call him up or release him. It is obvious that the Phillies would be interested, but after last nights comments made my Cubs manager Lou Piniella after a tough 5-4 loss in the ninth, Piniella would probably urge Hendry to seek some bullpen help. "I’m going to find out if there are some kids down in Triple A throwing the ball," he said. "Maybe that’s the answer, get some different kids up here that can throw the ball. I don’t know what else to say. I’ve tried everybody out there." Villone would help both bullpens and the only thing that would slow talks is Scott Boras is his agent, and he will ask for at least 1.5 million dollars. We will wait and see on what the Yankees do with Villone. The Yankees could look to get something out of him and try trading him, only having to pay half of his contract for a prospect or two.