Share All sharing options for: With Help from Cano, Hughes Tops Rangers 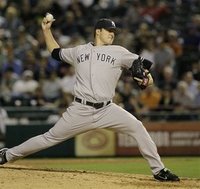 Phil Hughes was able to settle down after his average major league debut and pitched six and a third shutout innings of work, giving up no hits. Although he walked three, he came back and struck out six, and brought his ERA down to about 3.38. He apparently had an injury to his leg, leaving the game eight outs away from a no hitter limping. With help early on from Robinson Cano, who was 4-5 with 3 RBI, the Yankees were able to beat the Rangers 10-1. Jorge Posada had two doubles and collected 2 RBI's while Alex Rodriguez, although hitting no homeruns, was 3-4 with a run. The Yankees improve to 10-14, but fail to get out of last place. This is a huge step for the Yankees and Phil Hughes, who are in need of pitching after losing yet another pitcher a couple nights back. The Yankees play the Rangers in the second game of the series tomorrow, Andy Pettitte is taking the hill for the Yankees against Robinson Tejada and the Rangers.

UPDATE: PHIL HUGHES WILL BE OUT 4-6 WEEKS WITH A STRAINED HAMSTRING.