Share All sharing options for: Cubs Call Back Jones Trade 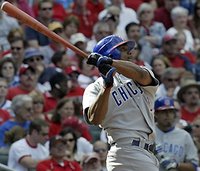 The Cubs were on the verge of trading Jacque Jones to the Marlins this afternoon and nearly agreed to a deal before a "major snag" ended trade discussions, according to one source. The Marlins were planning on using him as their everyday center fielder while Alejandro De Aza is out while the Cubs were hoping to acquire a solid minor league prospect or two. Many can assume that the snag is over money. Jones is owed 4 million this season and 5 million next season and any trade where more than one million dollars is involved has to be approved by the Commissioners Office. Jones' stay in Chicago got off to a rocky start and got worse even as he improved. He complained about the rowdy fans in right field and was the subject of many trade talks in the off season. Jones is batting .234 with 2 HR and 20 RBI this season in 63 games and is drawing interest from the Padres, Rangers, and Pirates.