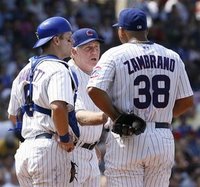 In the top of the fifth inning of the Cubs Braves game, struggling pitcher Carlos Zambrano let up five runs, one at the fault of catcher Michael Barrett, who failed to catch a two-seam fastball. After discussing what happened in the bottom of the fifth, Zambrano shoved Barrett and threw a punch at him. Before any more punches were thrown, both players were separated and done for the day. Michael Barrett was replaced by Koyie Hill and Zambrano was replaced by Scott Eyre. The interesting thing about what happened is that both players are in contract years, so this is probably signaling the end for one of them. It also signals the end of Barrett catching for Zambrano. If I had to guess, it probably means that Zambrano will be shopped at the deadline, if he is not traded, will be let go in October for two draft picks. The only reason I think this is because the free agent class is pretty strong for pitching, and not so strong for catching. And this is probably the best catcher the Cubs have had since the early eighty's. The Cubs have dropped into fourth place, seven games behind the Brewers. They better turn it around too because it is obvious that their June schedule will not be its easiest. After Atlanta, they go on the road to Milwaukee and then Atlanta, then a makeup game against Houston, and then six games at home between Seattle and San Diego. Following that home stand, they go on the road to Texas and then come home to face the Sox at U.S. Cellular Field. Braves pitcher Kyle Davies, who I interview yesterday, pitched seven strong innings, picking up the win. The Braves have won two straight, and are four games behind the Mets.

Carlos Zambrano went after Michael Barrett again in the clubhouse forcing Michael Barrett to the hospital for stitches. He won't pitch for the next several days leaving the job to fresh from the minors catcher Koyie Hill.