Share All sharing options for: Cubs' Ramirez On DL 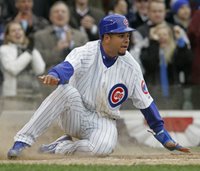 The Cubs will place third baseman Aramis Ramirez on the DL with a sore knee. The Cubs will activate Cliff Floyd off the bereavement list and play DeRosa at third base and Mike Fontenot and Ryan Theriot at second base. This is a blow to the Cubs offense with Derrek Lee struggling and Carlos Zambrano batting better than Jacque Jones. First, just to get it out of the way, should release Wade Miller, who is barely reaching 80 on his fastball. Then they should set a lineup that will change rarely so the players have some stability and confidence while their lineup is weak for the next couple of weeks.