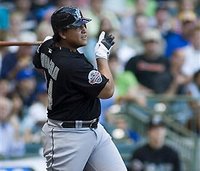 Although the Dodgers outfield is a mess and their lack of offensive production has lead to the dismissal of hitting coach Eddie Murray, the Dodgers are looking for a third baseman. Juan Pierre is batting .279 with 0 HR, 14 RBI, and 20 SB, but hasn't had the same effect on the Dodgers like he did on the Cubs and Marlins, which was the main reason they signed him. And the two year deal worth 18 million dollars with Nomar Garciaparra is also a bust. He is batting .273 with 1 HR and 34 RBI. He had 20 HR last season and in 62 games in 2005, had 9 homeruns. Although Andre Ethier is struggling and Luis Gonzalez is under contract for one year, the Dodgers are shying away from available outfielders like Adam Dunn and Jermaine Dye, and are attempting to acquire Marlins third baseman Miguel Cabrera. The Dodgers certainly have the prospects to please the Marlins but the only way this will happen is if the Marlins are willing to give up their best offensive player. If the Dodgers were to acquire Cabrera it would also be the start of a younger wave starting in 2008. With Abreu at second base, Loney in left field, and LaRoche at either first or third, they have the potential to dominate the NL West for the next several years.