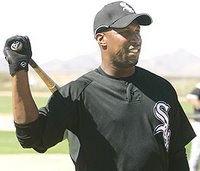 The struggling White Sox are loaded with soon to be free agents, and although GM Kenny Williams said he is not interested in trading, this White Sox team cannot holdup in the strong AL Central with the team they have. The NL West division race is so close already each team is looking for a way to pull ahead. And right now, each team is calling the White Sox about All Star outfielder Jermaine Dye. Dye has revitalized his career in Chicago and will look for a lot of money in the market. So trading him to a team that is desperate for help could bring back a lot of prospects. Right now, the Giants, Padres, and Dodgers have all engaged in talks, but nothing is serious yet. But all three teams have enough prospects to trade to make the White Sox happy. The Padres have a game and a half lead and would have to make room to play Dye regularly, but so would the Giants and Dodgers. Any trade that will happen is far away, and probably wouldn't happen until the deadline.