Ichiro Leaving, But Not Going Far

Share All sharing options for: Ichiro Leaving, But Not Going Far 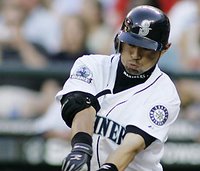 Before last nights Dodgers game, Dodgers GM Ned Colletti had a long discussion with Ichiro's agent Tony Attanasio in his suite. The topic of discussions was not said, but with Ichiro set to become a free agent in November, it seems very likely that could have been the discussion. Ichiro, 33, is a career .331 hitter with 66 HR, 388 RBI, and 250 SB, has also drawn interest from the Padres, Braves, and maybe a Orioles, who I believe will be a sleeper coming into the off season. Despite heavy spending on their bullpen, they are going to lose Corey Patterson, and signing Ichiro long term would lock him up until they can bring up a prospect to fill the spot. However, it seems more likely that he will stay out west by the Dodgers or Padres.