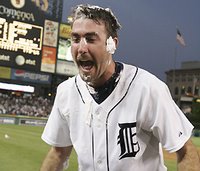 Tigers pitcher Justin Verlander squared up against veteran Jeff Suppan and the Brewers just trying to get the Tigers back in the division hunt. Verlander struck out twelve and walked four, while Inge, Granderson, and Polanco all contributed RBIs. Verlander struck out the first two batters in the ninth, and then forced a fly out from JJ Hardy to complete the sixth no-hitter in Tiger history, the first since 1984. He threw 112 pitches and improved to 7-2 with a 2.79 ERA. This just goes to show that his rookie year was not a fluke, and that he can dominate just about any team he plays. He will be the backbone of that rotation for the next several years to come and will help young prospect Andrew Miller become a very good and dominant pitcher. Tigers pitcher Mike Maroth will take Chris Capuano as they try to take the division from the Indians.