Street Out For Year?

Share All sharing options for: Street Out For Year? 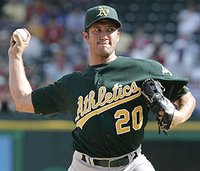 A's pitcher Huston Street faced another setback in his return to the majors, forcing him to get a second opinion on his irritated nerve in his elbow, not ruling out surgery. Good news coming from the examination is that there is no structural damage, but surgery is still an option. Street said he felt tightness after throwing Friday that did not go away. "If Huston continues to have pain, other options might have to be considered," Forst said when asked about the possibility of surgery. "But it's been just over a month (that Street has been out), we can wait awhile. Huston has more than this season to contribute." For now, we can rule out Street returning at the All-Star break. You can probably expect him to return if he can avoid surgery by the trade deadline or early August. Street, who has been replaced for the time being by Alan Embree, is 2-1 with a 2.50 ERA and 9 SV.