Share All sharing options for: Weiters Shows Most Potential 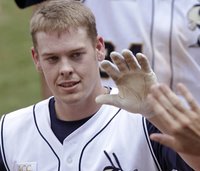 Weiters decided against pitching and went with catching from here on out and it was the best decision he has ever made. Not only was he able to excel as a hitter in his junior year, but he was able to showcase his defense and grow as a player. That improvement at Georgia Tech was so great this year that there was no doubt in any ones mind that he was to be taken if available. He has matured a lot, and still has time to fill into his 6'5'' frame. He is a switch hitter as well, and will probably start in Lo-A hoping his success there could possible push him to Double-A. The reason I would place him there is so he can get more at-bats with a wooden bat to get a better feel for it. But that is all he will need. The swing, bat, and arm are there otherwise; all he needs is some fine tuning. The Orioles see him with at the MLB in two to three seasons, and that is a very realistic approach. He has the ability to hit 20+ homeruns and a high average. "I'm very excited to be part of the Orioles organization," Wieters said in a conference call. "I really went into the draft with no predetermined [idea] of where I might go and what I might do ... From the time I was picked, I was very excited."