Share All sharing options for: Interview with Billy Butler 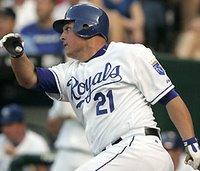 Friday morning, Royals first baseman Billy Butler sat down with me to answer some questions. Butler was one of the top rated Royals prospects in many years, and is showing he can be successful at the professional level. I want to thank Billy Butler for sitting down to this interview with me, I only hope that we can do this again for MLB Rumors. I also want to thank Doug Rogalski from Axcess Sports for working with my hours to set up this interview.

ELI: You play more first base than outfield now? How long have you played first base?

BILLY: Well, I’ve played first base most of my life, but have been playing more and more as I worked my way up through the minor league system.

ELI: Do you prefer outfield over first base?

BILLY: Wherever they play me I will play. I want to do what is best for the team so whichever the manager decides, I am happy to play it.

ELI: What was it like playing in the Futures Game?

BILLY: Oh it was great playing in the game. I was surrounded by great players with a lot of talent and was put up against great competition. And what makes that game so significant is that a lot of those players that played are now in the major leagues, so it shows just how good the talent was there.

ELI: You won the MVP in that game. Did that boost your confidence?

ELI: Was that the first Major League Park you played in? What was it like?

BILLY: I played in different stadiums growing up but it is always cool going to a professional stadium to play. But you always have to concentrate on the game.

ELI: You grew up in Florida, were you a Rays fan or Marlins fan?

BILLY: I was actually a Braves fan because I didn’t live too far from them. It was about a five hour drive to Atlanta.

ELI: So what is it like for you to now be playing professionally and see players like Maddux, Glavine, and Smoltz still playing?

BILLY: They were all good pitchers growing up and are still very good now so it would mean a lot to me to meet them or even face them.

BILLY: Yeah, I really liked Scott Rolen but I have to say I like Chipper Jones more because he is a Brave.

ELI: What was it like getting that first hit?

BILLY: It was great. It was even more special because it was off Johan Santana. He definitely knew my weaknesses but I think I got the better of him.

ELI: How about your first homerun?

BILLY: Oh well it was off Ervin Santana and as soon as I made contact, I was praying it would go out.

ELI: You are now in your second stint with the team, do you feel any more pressure now back to make a difference?

BILLY: I am actually more comfortable because I now know what to expect. I was able to get the rookie stuff out of the way and just go about my business.

ELI: You wear number twenty-one, is there any significance to the number?

BILLY: No, it was the number given to me during spring. If I had to choose a number I would want number sixteen, but Reggie [Sanders] has it. It would also be hard to switch now.

ELI: What was the draft experience like for you?

BILLY: Ahh, it was hectic. I had a lot of teams calling and they all just wanted to see what you could do.

ELI: Did you hear from most teams?

BILLY: I heard from just about every team, but I had a feeling that the Royals were most interested because they contacted me just a couple days before the draft.

ELI: Was it hard to focus as the draft approached in high school?

BILLY: Not at all, the draft was in the back of my mind. I was still taking it one game at a time because I still needed to help my team.

ELI: Alright, if you had to face one pitcher in the past, who would it be?

ELI: Okay, and besides Kaufman Stadium do you have a favorite?

BILLY: I haven’t played at Fenway Park yet, but I love that stadium.

ELI: Has anyone served as a mentor for you on the team?

BILLY: Mike Sweeney was a big help to me. If I am ever in the position that he was in with me, I would pass on what he told me.

ELI: What are some of the things he told you?

BILLY: He just told me to relax and have fun.