Share All sharing options for: Red Sox Keep A-Rod In Their Sights 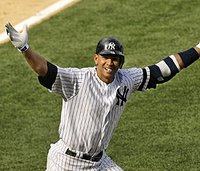 With the Yankees making another desperate attempt to sign him, saying either sign now or do not sign with us at all. Whether this is an attempt to force A-Rod into signing or not, the Red Sox are starting to make it known that they are interested in signing him if he is available. Red Sox President Larry Lucchino nearly acquired A-Rod back in 2003 before the deal fell through because of money. Later that off season he was traded to the Yankees. With Julio Lugo locked up as the shortstop, the Red Sox would probably let go of Mike Lowell, and potentially Curt Schilling to make room for his big salary. Letting go of Schilling would not be a bad thing, especially with solid pitching prospects Kayson Gabbard and Michael Bowden a year or two a way from being ready. Imagine a lineup with Manny, Big Papi, and A-Rod in the three, four, and five spots. Rodriguez, who is set to turn 32 this month, is batting .317 with 31 HR and 87 RBI.