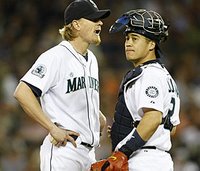 The Mariners jumped out to a 5-0 lead yesterday and if they were to have won that game, would have put them just three games back. Not only that, but it would have given them a lot of momentum getting to the Angels bullpen. Instead, they blow the lead and drop to four back and completely stop their momentum, sending them another loss tonight putting them five back. Assuming the Yankees win tonight, the Mariners will be tied for the wild card lead, and the way the Yankees play in September, it is safe to assume that they will probably take the wild card, maybe even the division, if the Red Sox continue to fall. Vlad Guerrero has been ripping the cover off the ball lately and Jered Weaver seems to have found his pitch. Howie Kendrick is starting to turn into the player he is capable and it seems Scioscia just knows what is working right now. The A's and Rangers are all but out of it and it appears that the division belongs to the Angels, leaving the Mariners to fight for the Wild Card spot. They face Seattle four more times late in 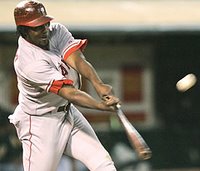 the season so you can't count them out yet, but the way the Angels have been playing it is hard not to. And the Mariners have a pretty tough road schedule in September facing the Blue Jays, Yankees, and Tigers to start the month. Can the veteran Mariners step it up to take some pressure off the young guys?