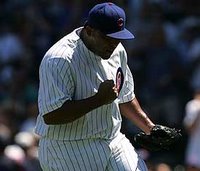 The Chicago Cubs have signed Carlos Zambrano to a five year deal, worth 91.5 million dollars. The deal has a 19.25 million dollar player option for a sixth year. "I feel happy right now, feel comfortable right now but it's not enough," Zambrano said at news conference. "I have a mission to complete and I have a way to go with my teammates to lead this team. ... It's not enough when you retire and don't have the ring." Most Cubs fans believed that ownership was in limbo and no money could be thrown around, but I guess the Tribune Company put the go ahead on the deal just to get it done. Zambrano is 14-9 this season with a 3.86 ERA and 139 K. Many teams were looking to add Zambrano in the off season but will now have to look to other Free Agents.