Share All sharing options for: Cubs Looking For Missing Piece 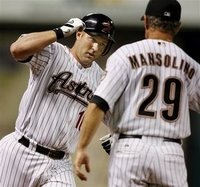 The Cubs have been looking for another solid veteran for their bench for the past week but have yet to find anything. The unloaded two of their prospects, but nothing big. They traded Buck Coats to the Reds and completed the Craig Monroe trade sending Clay Rapada there. Their aren't two many players available as of right now. Jason Lane, Dmirti Young, Scott Podsednik, and Sammy Sosa are the main bats on the waiver wire, while some veteran 40-man guys in the minor leagues are available too. They could always go after a pitcher too. Odalis Perez, Josh Towers, and Steve Trachsel are the main pitchers on the wire as well. In 2003, they traded for Aramis Ramirez, Randall Simon, and Kenny Lofton. Lofton, who played center field, ignited the Cubs offense and spirit in the clubhouse. Maybe someone like Lane, who has played in the NL Central and is 10-18 lifetime at Wrigley Field could help from the bench. They will call up a bunch of guys September 1st which should take some pressure off some of the veterans, but they are looking for something to put them one step ahead of the Brewers and Cardinals. They are currently a game and a half ahead and it looks like it will come down to the very end.