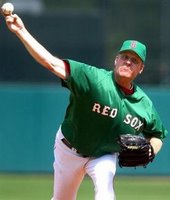 Curt Schilling has mentioned that he would be willing to pitch with the Devil Rays if he leaves the Red Sox next season? Is he spinning the pot try to get more money from the Red Sox, or could he actually be serious? "I have a list. Obviously one of the things I will do at the end of the season is sit down and write to those teams on that list, explain my situation, and explain the situation that I want to go into. I’m not going to need anything special." Schilling, who represents himself, is probably the best pitcher on the market, despite his age. He could end pitching for a contender like the Dodgers, possibly even the Yankees. But Schilling has always been a mentor to younger players, and Tampa Bay is where a lot of young pitchers are at. "The only other option would be a situation like here [Tampa Bay] where you have a tremendous young nucleus of pitchers, young players, a good manager, and good people where my last year could be spent having an impact on guys far beyond my playing days." Schilling is 7-5 this season with a 4.25 ERA and 79 K. At Tropicana Field, Curt Schilling is 6-4 W-L with a 3.43 ERA. He has only given up 59 hits at Tropicana Field, 10 of them, homeruns. The Devil Rays do have money to spend for a two year deal, but signing him against all the teams in the market for pitching, seems doubtful.