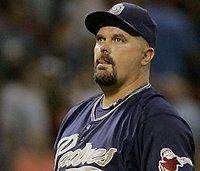 The Diamondbacks were close to landing David Wells this off season before pursuing Randy Johnson and now that he is back on the market, they may make another push for him. Wells is 5-8 this season with a 5.54 ERA and shares a ranch with Diamondbacks bench coach Bob Gibson, so signing soon probably won't be a problem. This season, Wells has struggled versus the NL West pitching in 19.3 innings and having an ERA of 5.08. The Diamondbacks are two games ahead of the Dodgers and could use a veteran starter as they come towards the end of the season.

UPDATE: THE DIAMONDBACKS ARE NO LONGER INTERESTED IN SIGNING DAVID WELLS.