Encarnacion To Be Traded?

Share All sharing options for: Encarnacion To Be Traded? 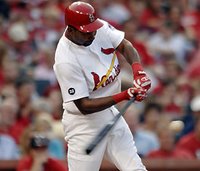 Juan Encarnacion has been complaining about his playing time with the Cardinals over the past couple of weeks and has publicly said that the way Tony La Russa is handling the situation is "unprofessional." Encarnacion is doing bad this year, but his attitude has affected the clubhouse. He is batting .290 AVG with 7 HR and 43 RBI and is set to make 6.5 million next year before becoming a free agent. It is possible we could see him traded during the off season to a team looking for an outfielder, maybe the White Sox. Other teams that may be in the hunt for an outfielder at a cheap price include the Twins, Royals, or Reds, among others.