Share All sharing options for: If Hunter Leaves, Twins Should Trade Johan 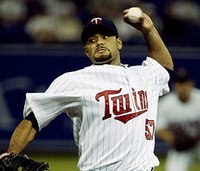 It seems contract negotiations with Torii Hunter have turned from nearing an extension to doubtful. And with Hunter putting them off till after the season suggests that he will explore the market desperate for solid talent. Santana, who dominated in his last couple starts said he was frustrated over the Twins trading of Luis Castillo and lack of spending money. He went on to say that if Hunter leaves, he will leave too. So, if Torii leaves for another team you can assume that the Twins will see what they could get for him. They could get a boatload of prospects, and a couple proven players as well. Santana has proved his consistency over the past several years winning 12 or more games since 2003. This season, he is 14-9 with a 2.97 ERA and 198 K and has proven his durability throughout his 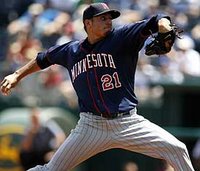 whole career. This would be great to start rebuilding for the Twins, get some proven pitching, a veteran or two, and clear up some cash to make a splash too. They will also get a first round compensation pick from the Twins they really could start. Matt Garza, Glen Perkins, Kevin Slowley will only get better, and Chris Parmelee is very young and fairly far away, but is showing he has the stuff which could force the Twins to push him a little bit. And don't forget about Fransico Liriano.