Share All sharing options for: Interview with Chin-Lung Hu 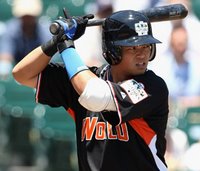 Today, I had the opportunity to interview one of the Dodgers top prospects Chin-Lung Hu, a shortstop playing for the Las Vegas 51s, the Dodgers Triple-A Affiliate. Last month, Hu was named the MVP of the Futures Game, joining a group of All-Star players who have already won the award. It is possible we see Hu patrolling the left side of the infield some time next season. He has a bright future ahead of him and it is obvious because of his consistency at all the levels. I would like to thank Jim Gemma and everyone in the Las Vegas 51s Front Office for getting this interview set up for me and on such short notice, I really appreciate it.

ELI: What are the major differences in playing here and in Taiwan? Are the fans very different?

CHIN-LUNG: Oh, I feel a lot more comfortable here. The stadiums are a lot nicer; the level of play is better and more competitive. The fans are great here and in Taiwan, but here they are a little crazy. They follow you everywhere. [laughs]

ELI: How does it feel to be a two-time All-Star in the minor leagues?

CHIN-LUNG: It’s an honor to be considered an All-Star and represent my team.

ELI: How does it feel to follow in the footsteps of Alfonso Soriano, Jose Reyes, and Grady Sizemore as the MVP of the futures game?

CHIN-LUNG: It was very exciting to win the award that so many great players have won before me.

ELI: Did it give you a lot of confidence?

CHIN-LUNG: Oh yeah, it gave me a lot of confidence.

ELI: How long have you played baseball? Have you always been a shortstop?

ELI: Have you always been a shortstop?

CHIN-LUNG: Yeah, for the most part. I was tried in center field one time but that only lasted a couple of weeks.

ELI: There aren’t a lot of players from Taiwan in the league, how does it feel to represent your country playing for a great team in the Dodgers?

CHIN-LUNG: It is nice and it feels good. Playing here knowing that is fun.

ELI: Do you keep in touch with players from Taiwan around the league. Like Chien-Ming Wang or Hong-Chih Kuo?

CHIN-LUNG: Yeah we talk from time to time back home.

ELI: You where number 8, is there any significance to that number?

CHIN-LUNG: No, it is just the number they gave me here in Triple-A. I like number three though if I got to choose. I like single-digit numbers.

ELI: How does the level of competition change as you move up through the system? What is the biggest difference between High-A and Double-A? AA and AAA?

ELI: What was it like being invited to spring training? Did anyone give you some advice? Who?

CHIN-LUNG: I was very happy and excited. I got to see my favorite players. I got to talk to Nomar [Garciaparra], and he is like a hero of mine. And when I got to talk with them, after it was very exciting. All these guys make so much money, but work so hard, so it makes me feel good. I got a chance to work with Juan Pierre a little bit on hitting, which was very nice and exciting. Nomar [Garciaparra] also gave me some good advice at shortstop.

ELI: Do you have a favorite major league stadium?

ELI: Which jerseys in the major leagues do you find the most attractive?

CHIN-LUNG: I like the Dodgers the most. They are classic and haven’t changed in awhile.

CHIN-LUNG: I love Ichiro. He has always been my favorite.

ELI: If you could bat against one pitcher, in the past or present, who would it be?

CHIN-LUNG: I think Roger Clemens. He is so good and has been for so long.